On the trail of a lame dinosaur in La Rioja 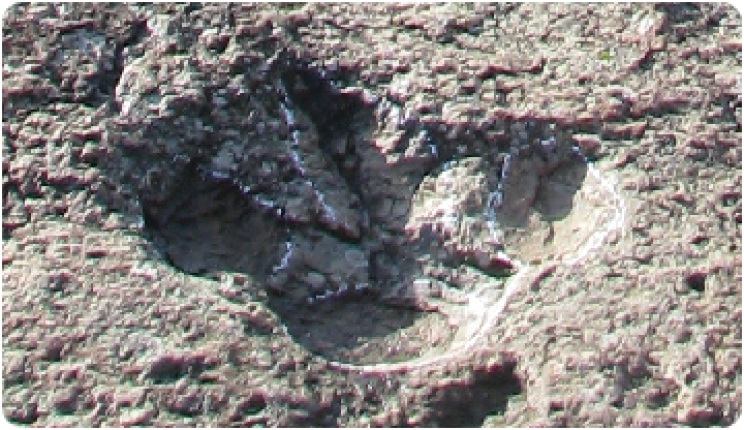 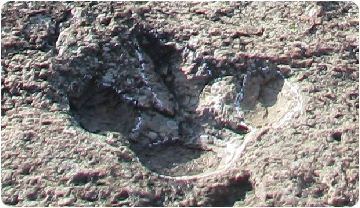 The analysis of a dinosaur trackway from the Barranco de la Canal (La Rioja) site reveals an injury in the left foot of an ornithopod dinosaur. The animal performed an abnormal gait probably due to the pain caused by the pathology. The investigation was led by researchers at the ‘Institut Català de Paleontologia Miquel Crusafont’ (ICP) and published in the journal Cretaceous Research.

Trackways left by dinosaurs can provide unique insight on several aspects of animal’s life, such as its size, walking speed, behaviour (i.e. if it was a gregarious or solitary species, for example), taxon and might even show if the animal had any pathology. A study led by Novella Razzolini, researcher at the ‘Institut Català de Paleontologia Miquel Crusafont’, published in the journal Cretaceous Research, analyzed a trackway composed of 31 consecutive tracks made by what has been interpreted as a large ornithopod at the Barranco de la Canal site, close to the town of Munilla (La Rioja, northern Spain).

Using laser and 3D photogrammetric techniques researchers can precisely determine the geometrical characteristics of the footprints. "We detect that left-right pace length is significantly shorter than the right-left one, what makes us think of a limpness caused by an injury", explains Razzolini. Researchers have concluded that the animal performed an asymmetric gait probably to avoid the pain caused by an injury in the second digit of its left foot. 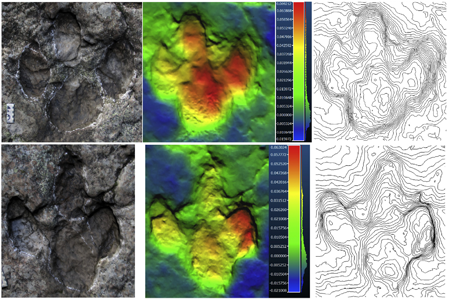 Beyond analyzing pace length, one of the most interesting aspects of this research that supports the hypothesis of the injury is that left foot traces show a different morphology from the right ones. While those on the right reveal a previously known shape in Lower Cretaceous ornithopods trackways (named Caririchnium lotus because of the uniform distribution of the fingers that reminds of the petals of the lotus flower), this symmetry degree is not observed in left tracks, where the second finger almost overlaps the third one. "Nevertheless, we also see that the speed of movement of the animal was not altered," concludes the study's lead researcher.

Traditionally these types of studies have been focused only on the morphology of the tracks. However, in this case researchers have quantified the differences between tracks using a new parameter named "interdigital width", which has allowed proofing statistically the differences between left and right tracks. Ichnopathologies (track alterations due to injuries) are difficult to distinguish from irregular tracks caused by sediment deformations.

120 million years ago, La Rioja was a lake area with salt marshes. The silty sandstone favoured the preservation of the tracks of animals that once lived there. Besides ornithpod dinosaurs, remains of carnivorous dinosaurs, turtles and fishes have been found in this area.

Ornithopods constitute a large group of herbivorous dinosaurs. The trackway in El Barranco de la Canal was probably made by an iguanodontid ornithopod, an animals that could reach 11 meters long and 2 meters high.

More in this category: « Pliobates cataloniae, a new primate species at the root of the tree of extant hominoids Oldest footprints in Catalonia »
back to top