This group focuses on the paleobiodiversity, evolution and paleobiology of continental vertebrates from the Cenozoic era (66 Ma to present, incuding the Paleogene, Neogene and Quaternary periods), with emphasis on the rich fossil record of mammals from Catalonia and nearby areas. Particular efforts are devoted to research paleoenvironmental change through time by means of paleoecological and paleobiodiversity dynamics analyses (which is especially relevant in the light of current global climate change), as well as in the evolution of primates based on their fossil record (with emphasis on the origins of the great ape and human clade).

The composition of the Cenozoic Research Area and Research Groups is currently the following:

This group focuses on the paleobiodiversity and paleoecology of terrestrial ecosystems during the Mesozoic era (252-66 Ma), with emphasis on those time intervals best represented in the fossil record of Catalonia (bony remains, eggs and ichnites)—in particular, the last dinosaurs of Europe and associated faunas, in order to model the ecosystems of the Late Cretaceous before the K-T extinction that wiped out non-avian dinosaurs and other terrestrial vertebrates.

The composition of the Mesozoic Research Area is currently the following:

This area is devoted to the study of the patterns and causes of evolutionary change and extinction by combining fossil evidence with the biology of extant organisms. Emphasis is put on the evolution of life-histories under changing ecological conditions from the viewpoint of adaptation, based on the paleohistological study of hard tissues within the analytical framework provided by life history theory of biological evolution (ecology, demography, physiology and adaptation).

The area also encompasses  computational approaches that aim to digitally obtain paleobiological and evolutionary data of extinct organisms based on a wide range of techniques from imaging to functional approaches.

This group is a semitechnical area based on the use of light non-invasive technologies applied to Palaeontology, to explore and quantify inner, usually non-visible, structures.

These techniques include 3D imaging, industrial and medical computed tomography, laser scanning, photogrammetry as well as engineering techniques such as Finite Element Analysis. The facilities of the ICP include an industrial Computed Tomography scanner: with an X-Ray tube of 450 kV, this represents the most powerful research CT system in Spain to scan large samples in high resolution. Other facilities are Next Engine laser scanners as well as powerful workstations with the principal software to analyze and interpret the results. Moreover, the department has a stable collaboration with mechanical engineers of the Universitat Politècnica de Catalunya (UPC) developing new biomechanical approaches for extinct animals.

The origin and evolution of extant hominoids, group composed by lesser apes, orangutans, chimpanzees, gorillas and humans, is one of the most debated questions during the last century of palaeontological research worldwide. It is the main goal of this group to help resolving this problem. This group works on the extraordinary Catalan hominoid fossil record, the worldwide richest record between 14-8 Ma, the critical time span for which molecular and palaeontological data suggest the origin of this group.

Using new techniques such as CT-scan reconstruction and analysis, morphometric geometrics and phylogenetic analysis, the group is trying to test the current paradigm that holds that extant hominoids is a monophyletic group with a past common ancestor as well as the importance of homoplasy in their evolution. Another important goal of the group is the reconstruction of the evolutionary history of Paleogene primates and the origin of the human hand.

This group also focuses on the primate evolution during Eocene as well as the origin and adaptations of the human hand. 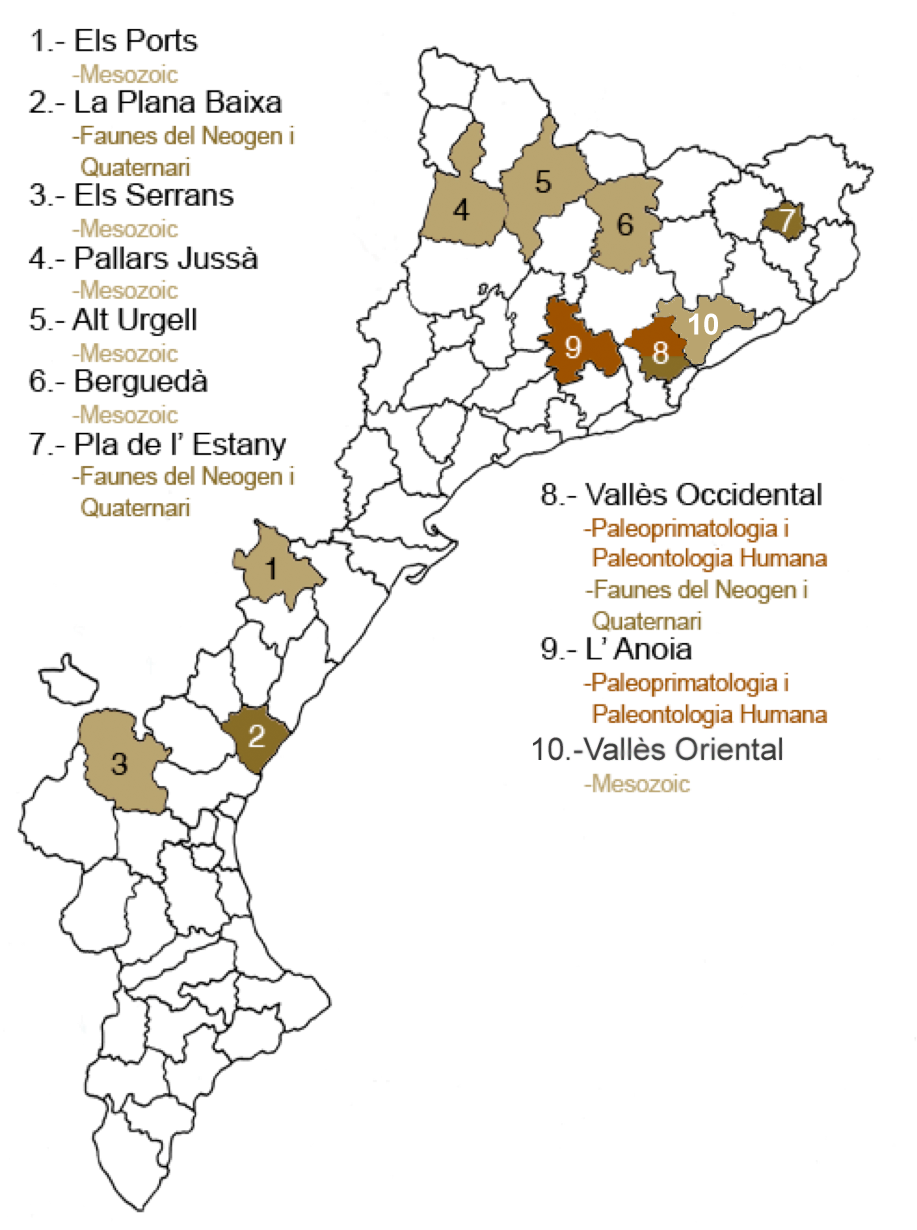