The Guadix Basin: a view from the ICP 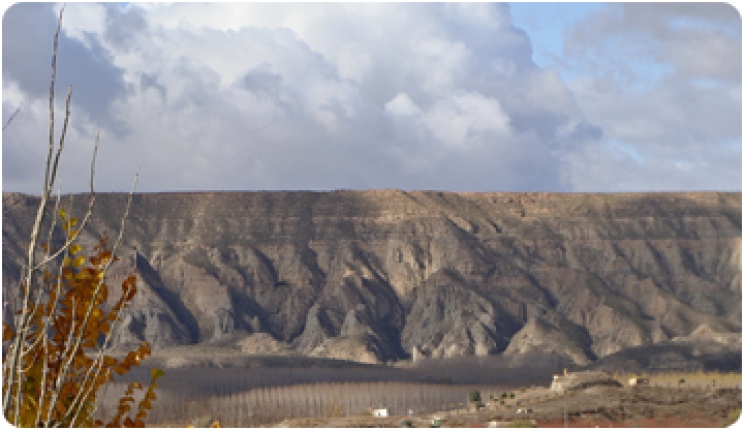 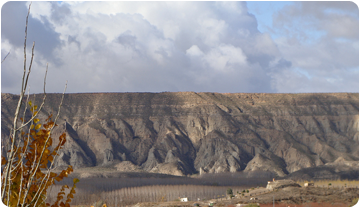 The Guadix Basin, in the Betic Cordillera, is one of the privileged areas of paleontology of the Iberian Peninsula. The formation of the basin and its evolution over millions of years have left marine and continental sediments of late Miocene to Pleistocene exposed. It is at this time when the Mediterranean suffers major geological changes until reaching its present form. The researcher of the ICP Raef Minwer-Barakat is one of the paleontologists who better knows this area, and in this interview he explains some of the key findings that have been made, as well as research results he hast recently published.

Q: How did you start investigating the Guadix Basin?

Well, I started during my first years as a paleontologist. I did my PhD thesis on rodents and insectivores from the Miocene and Pliocene of the Guadix Basin. As a result of this study, in the last years I have published, together with researchers at the University of Granada, various articles about small mammal fossils from this area.

Q: For someone who does not know it, could you tell us why it is so interesting from a paleontological perspective, and what are the most important sites?

The Guadix Basin is an exceptional place for several reasons. First, the continental record of this basin includes a very long time interval, ranging from the late Miocene to middle Pleistocene (more than five million years). During this time, the basin was occupied by alluvial, river and lake environments, where numerous vertebrate remains were deposited and preserved. In addition, the area is currently subject to a high rate of erosion that has exposed long continuous sections of continental sediments. This, coupled with the sparse vegetation of the area, makes the exposure conditions exceptional and facilitates locating vertebrate reservoirs.

Talking about paleontological sites, among those who have had more media coverage highlights Venta Micena, Fuente Nueva and Barracon León. The first, in Orce, is known for some controversial fossil remains, as some scientists argue that they are human while others disagree with this attribution. But our team has focused on the study of older and free of controversy deposits, which delivered remains of small mammals (mice, dormice, squirrels, moles, shrews ...). The most importants would be the section of Gorafe, known since the 70s of last century, the Moreda karst reservoir or the paleontological sites of Tollo de Chiclana -which I studied in my doctoral thesis-, to name a few. Another place of interest is Negratín, where we identified some African rodents. This finding is a further evidence of the faunal exchange between Africa and Europe in the context of the Mediterranean desiccation that occurred at the end of the Miocene. 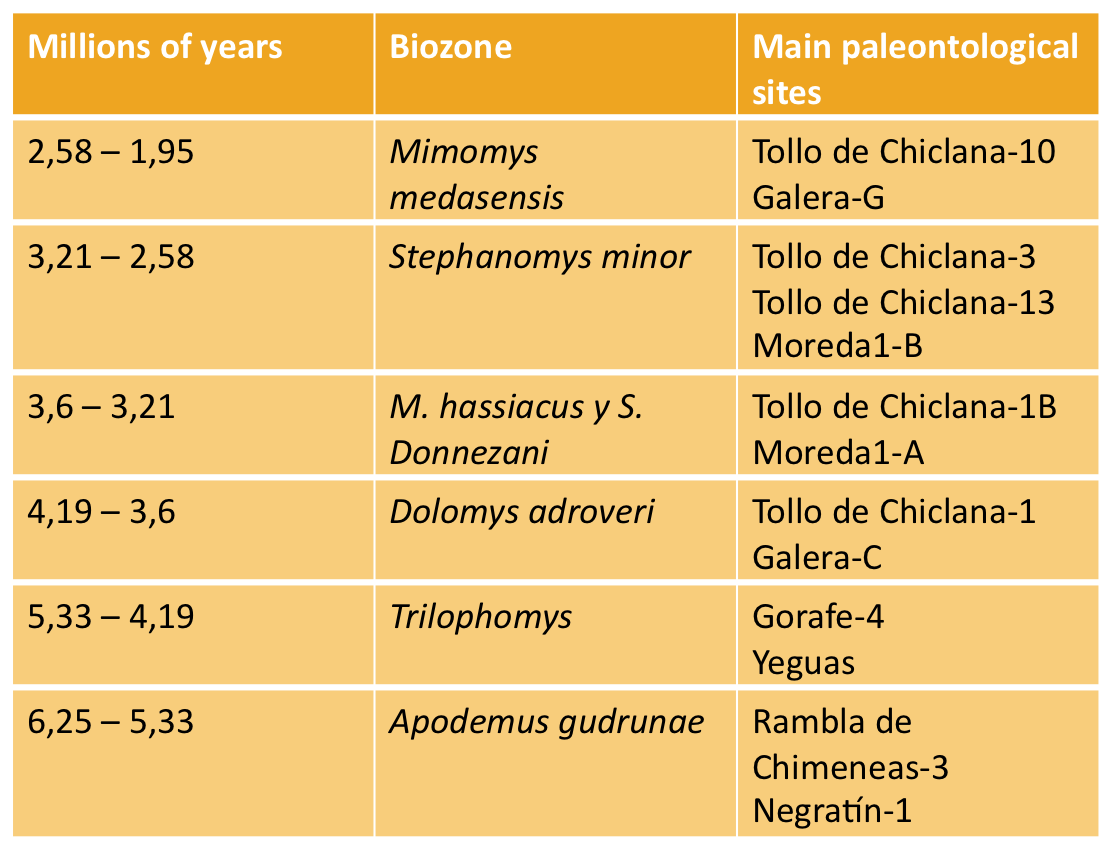 Biozones for the continental record of the Guadix Basin, following the research published by Raef Minwer-Barakat and colleagues.

Q: Tell us some details of your research. You have recently published in the journal Lethaia a biozonation of this Basin. Can you explain us what are the biozones and what are the results of this work?

Yes, the work published in Lethaia is a biozonation of the continental deposits of the Guadix Basin. A biozone is a body of sedimentary rocks characterized by its fossil content, ie by the presence, absence, coexistence or abundance of certain species. To define these biozones, we had to previously study the fossils of sites of different ages, identify species and analyze in detail the changes that occur over time, from the oldest deposits to the latest. On that basis, in the case of the Guadix Basin, we divide the record into six biozones, limited by appearance and disappearance of species.

To establish biozones in continental environments, the most useful fossil are rodents. First, their remains, especially teeth, are relatively abundant and are usually found well preserved. Furthermore, this group has experienced rapid change, so that the different species have short durations and allow us to know in detail the age of the sites where they have been discovered.

Q: Why having well defined biozones can be of great interest to other paleontologists investigating in this Basin or in other European sites of the same age?

Setting the succession of species in an area where there is a long continuous record is very useful because it becomes the reference for dating other more isolated sites. That is, if in this paper we determine which species occur in a particular age, when we find the same species at another site we interpret that it has a similar age. Therefore, it is important to choose those species that have a shorter duration and also a wide geographical distribution to define the boundaries of biozones, as this enables making comparisons with distant sites. 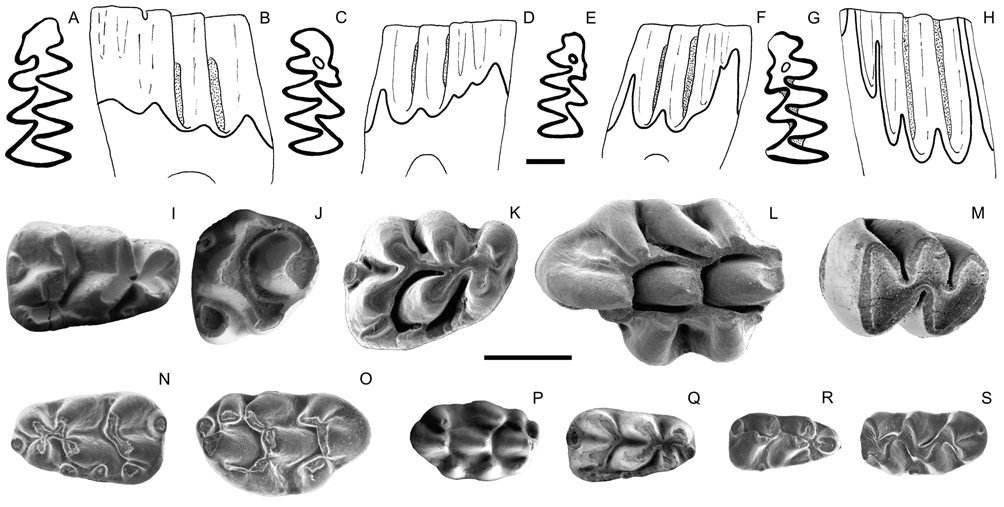 Q: In other of your works you endeavour to date the oldest continental sediments of this basin. Did you also used small mammals in this case? Why a precise dating is so important?

I guess you are talking about the work recently published in the online edition of the journal Geobios. The age is set, as I said before, thanks to fossils, comparing the species found at the sites we have studied with other with previously known age. In this case, our work discusses a new dating of the oldest continental deposits in the Guadix Basin, which some paleontologists defined at about 5.4 million years ago. This is an important information to know, as at that time the basin was transformed from a marine environment to a continental setting, an event that led to the interruption of one of the marine connections between the Atlantic and the Mediterranean that existed in the Miocene.

Q: Finally, for those far from paleontologica reserach, how can we imagine the Guadix Basin between 6 and 2 million years ago?

In the time interval that we studied in our work the Guadix Basin was an endorheic basin. This means that the water system was not going out to sea, but had a series of alluvial fans and a river that ran through the western part of the basin and flowed into a large lake on the east. The presence of different species of mammals allows us to roughly know the climatic conditions prevailing in the area at different times. For example, in the Upper Miocene we interpret the existence of warm and dry conditions from the presence of groups like gerbilids -a group of rodents that is currently only found in Africa and Asia-, and ground squirrels. In the Pliocene there is a change to colder and wetter conditions and we would find wood environments, as evidenced by the presence of animals like dormice, flying squirrels or the desmans -a group of living moles associated with perennial streams- . At the end of the Pliocene and during the Pleistocene a further decline in temperatures occurs and open herbaceous environments become more frequent, as evidenced by the predominance of arvicolid groups -such as moles and water rats.

More in this category: « The bovid Tethytragus also in the Vallès-Penedès Palaeobiology and Biodiversity Conservation: a partnership for the future »
back to top