Described a new large titanosaurian dinosaur from the Pyrenees 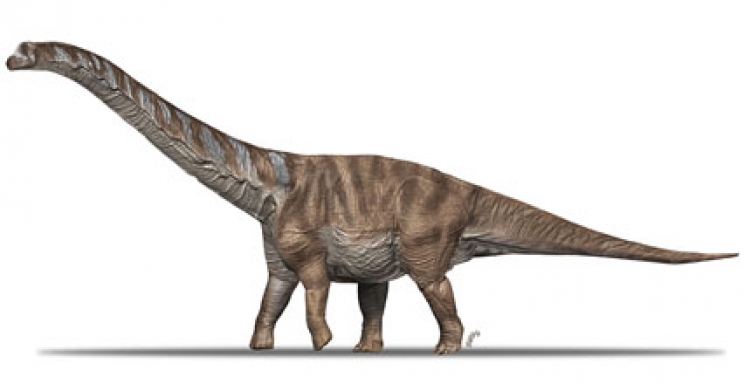 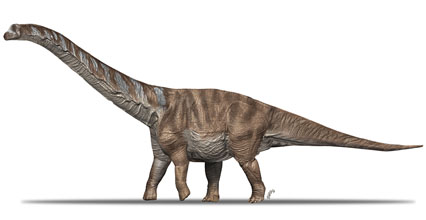 The skeleton of Abditosaurus kuehnei is the most complete titanosaur fossil discovered so far in Europe. This herbivorous dinosaur was about 18 meters in length and weighted 14 tons. The research published in Nature Ecology & Evolution is led by researchers from the Institut Català de Paleontologia Miquel Crusafont and the Conca Dellà Museum (Catalonia, Spain).  The history of the finding was captured in the documentary "Europe’s last giant" .

Researchers from the Institut Català de Paleontologia Miquel Crusafont (ICP), the Conca Dellà Museum (MCD), the Universitat Autònoma de Barcelona (UAB), ​​​​the University of Zaragoza (UNIZAR) and the NOVA University of Lisbon (UNL) have described the new species of titanosaur dinosaur Abditosaurus kuehnei from the remains excavated at the Orcau-1 site, in the southern Pyrenees (Catalonia, Spain). The semiarticulated 70.5-million-year-old skeleton is the most complete specimen of this herbivorous group of dinosaurs discovered so far in Europe. Moreover, Abditosaurus is the largest titanosaur species found in the Ibero-Armorican island —an ancient region nowadays comprising Iberia and the south of France— representing a senescent individual estimated to be 17,5 meters in length with body mass of 14,000 kg.

It is precisely the size of this giant one of the most surprising facts to researchers. "Titanosaurs from the Upper Cretaceous of Europe tend to be small or medium-sized due to their evolution in insular conditions”, explained Bernat Vila, paleontologist at the ICP leading the research. During the Upper Cretaceous (between 83 and 66 million years ago), Europe was a large archipelago made up of dozens of islands. The species that evolved there tend to be relatively small, or even dwarves compared to their relatives living in large landmasses, due primarily to the limitation of food resources in islands. “It is a recurring phenomenon in the history of life on Earth, we have several examples worldwide in the fossil record of this evolutionary trend. That’s why we were astonished by the large dimensions of this specimen”, said Vila.

The fieldwork conducted over several decades unearthed 53 skeletal elements of the specimen. These include several teeth, vertebrae, ribs, and limb, scapular and pelvic bones, as well as a semiarticulated fragment of the neck formed by 12 cervical vertebrae. "We were really lucky, it is unusual to find such complete specimens in the Pyrenees due to its troubled geologic history", explains Àngel Galobart, ICP researcher and director of the Conca Dellà Museum (Isona, Catalonia). 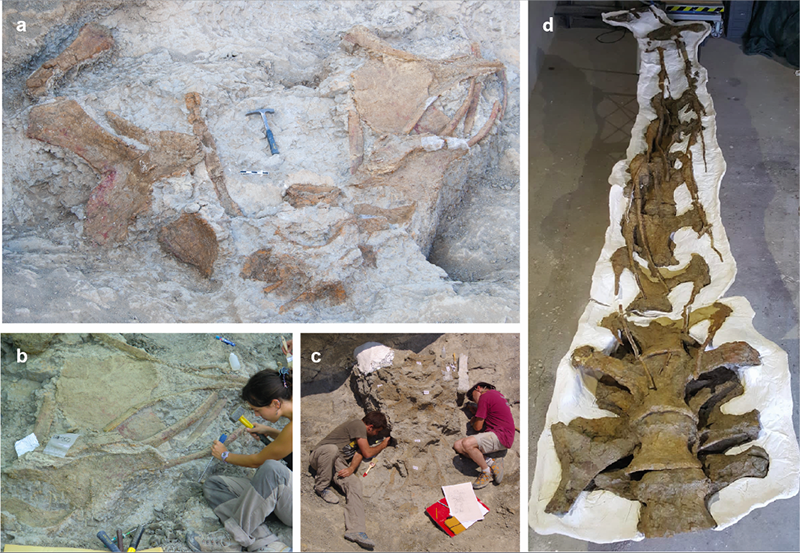 Images of different fossil remains of Abditosaurus kuehnei at the Orcau-1 site (a), the excavation process (b and c) and the neck after fossil preparation (d)

The excavation of the neck in 2014 (recorded in this video) was a technical challenge. Once prepared for extraction, the neck was encased in a large block of polyurethane foam, becoming one of the largest jackets ever excavated in Europe.

The history of the research that has led to the description of the new species dates back to 1954, when German paleontologist Walter Kühne collected the first remains and sent them to Madrid. The site fell into oblivion until 1986, when some more remains began to be extracted until a great storm forced the cancellation of the excavation. Subsequently, fieldwork on the site fell again into oblivion until a paleontologist from the ICP resumed systematic excavations in Orcau-1. The story of this finding was featured in the 2017 documentary “Europe’s last giant”. The generic name Abditosaurus means 'hidden reptile' and the specific epithet kuehnei is a tribute to its discoverer 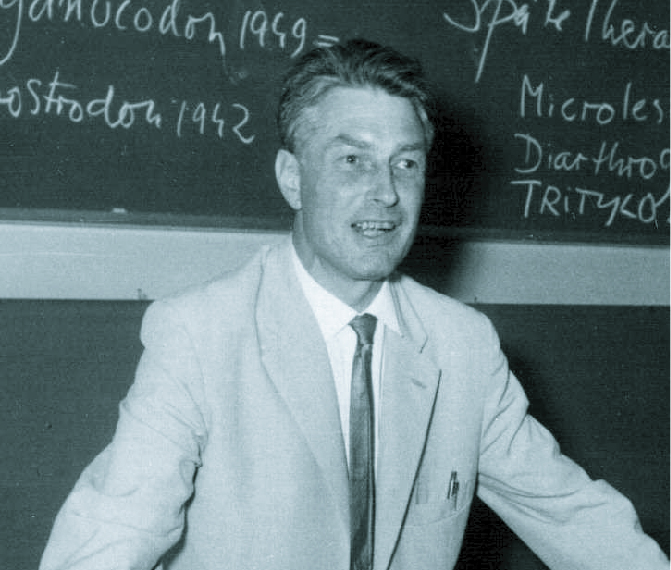 The german paleontologists Walter Kühne in an archive image

In their article published in Nature Ecology & Evolution, researchers conclude that Abditosaurus belongs to a group of saltasaurine titanosaurs from South America and Africa, different from the rest of European titanosaurs that are characterized by a smaller size. These authors hypothesize that the Abditosaurus lineage reached the Ibero-Armorican island taking advantage of a global drop in sea level that reactivated ancient migration routes between Africa and Europe.

"Other evidence support the migration hypothesis", explains Albert Sellés, paleontologist at the ICP and co-author of the article. "In the same site we have found eggshells of dinosaur species known to have inhabited Gondwana, the southernmost continent”.

The new finding is a major advance in the understanding of the evolution of sauropod dinosaurs at the end of the Cretaceous and brings a new perspective to the phylogenetic and paleobiogeographic puzzle of sauropods in the last 15 million years before their extinction.

“During the Jurassic and Cretaceous, Iberia was the point of connection between Eurasia, Africa and North America. Studying how Abditosaurus relates to the fauna of these continents helps us to understand when there were connections between them, and when they became isolated", says Miguel Moreno, researcher at the Museu de Lurinhã and NOVA University of Lisbon that has performed the paleobiogeographic study.

Titanosaurs are a group of sauropod dinosaurs that become very diverse and abundant in the terrestrial ecosystems of the Cretaceous. All of them were quadrupeds and phytophagous. Titanosaurs had a small and pointed skull, with small nail-shaped teeth used to uproot vegetation. Their body was robust, with forelimbs shorter than the hindlimbs and a long necks and tails. Some species sported a skin covered with bony plates named osteoderms that may have served as a protective shield or as a reserve of calcium.

The paleontological sites within the Catalan Pyrenees have provided exceptional dinosaur fossils over the last century. Research is especially significant as its fossil record includes the last vertebrate faunas, including non-avian dinosaurs, that lived in Europe right before the global extinction event that took place 66 million years ago.

More in this category: « 110-million-year amber reveals an unexpected lizard An overlooked Jurassic Park of lizards »
back to top